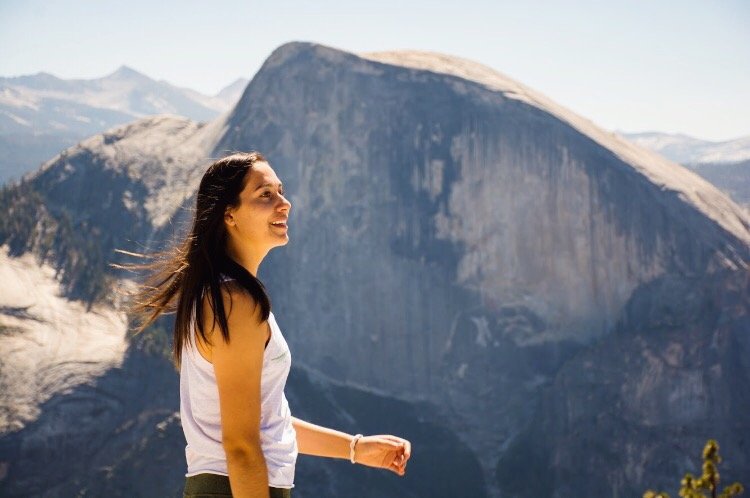 Ask me what my favorite national park is and I won’t hesitate to tell you it’s Yosemite. If you know me, you know that I’ve been coming to this park every year since I was a little girl. This year in particular, will hold a special memory, as it is my first trip to this park that I’ve taken without my family – only friends. Plus I hiked to North Dome, which was a major highlight of the trip.

Of course I’ve been in the Valley with friends before, but always with family members as well. Usually with my older brother who takes the lead in planning (thank goodness btw, planning is hard work). This year I camped with two of my closest friends and made two new friends. To be able to feel so comfortable camping and hiking while leading friends along the way, made me realize how much I’ve grown over the years. It’s this strange feeling of both wishing my family was experiencing it with me, but also being thankful for the ways they’ve taught me to thrive independently outdoors. 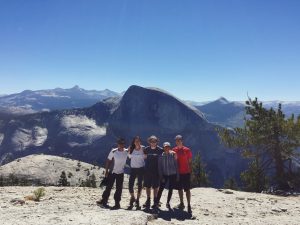 Since we only had two nights in the Valley, I only planed for 1 day-hike. I’ve done the most popular Yosemite Valley trail (Mist trail to the falls) so. many. times. Because it’s classic and stunning, and you can really never go wrong. But I wanted to see some new perspectives, so that’s how I picked to hike to North Dome. 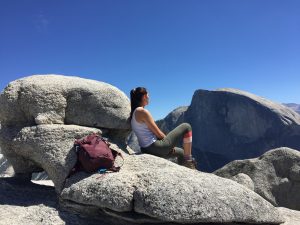 To get to the trailhead from the campsite in the valley was about an hour drive, which meant that we had to get an early start. Especially since parking at the trailhead is limited (as there are maybe 15 spots in the paved area). PSA: yes, there is a bathroom at the trailhead. 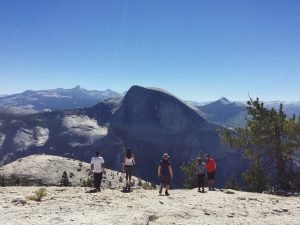 The trail is one of those inverted hikes, aka you descend on your way to the lookout and then climb up on the way back out. These types of hikes are deceptive because the beginning is over in a flash. It felt like an easy walk through the forest trees, and in no time we were seeing views of the majestic half dome.

When the trees clear, Half Dome is on the left. And the way the trail cuts across the mountain almost feels as if you’re walking away from Half Dome’s face. But trust me, the trail snakes around to bring you to one of the most direct views of half dome you can get. This is because North Dome sits directly across from Half Dome, with the valley in the midding. In fact, there’s even a legend about these two domes forced to stare across at each other eternally:

“Long ago, a woman named Tissayak and her husband Nangas traveled to Yosemite Valley from the arid plains. Exhausted after the long journey, Nangas lost his temper and hit Tissayak. As Tissayak dashed up Yosemite Valley, acorns spilled out of her basket, and those acorns later grew into oak trees. When Tissayak reached Mirror Lake, she drank it dry. When the thirsty Nangas approached, he grew enraged and hit her again. As Tissayak threw her basket at Nangas, the angry gods turned the couple into stone. Nangas became North Dome (with Basket Dome above) and Tissayak became Half Dome, her tears marked by dark streaks on the vertical face. For the rest of eternity the quarreling couple must now face each other in silence.”

So yeah, it’s kind of a dark story about the two direct domes. Going back to the hike though… we stopped to take pictures at the part of the trail where the dirt path first meets rock – thinking that this was the lookout spot. But if you look toward the valley, you can see the real dome. Unfortunately, the trail descends steeply as you cross the rock surface to reach the actual North Dome. Keep heading down and follow as the trail curves left and descends even more. I promise the decline (and resulting incline) is worth it because once you’re on the dome you’ll have an up-close and personal view of Half Dome. You can also see the valley below, and if you look closely – cars driving to glacier point.

The return back to the trailhead is a steep incline, so take your time and don’t feel bad about needing breaks. Also – PSA: wear (and reapply that sunscreen)! I got the worst sunburn of my life by being on this open trail for too long. 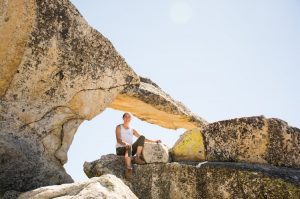 There’s a little side trail to see a natural rock arch (which I didn’t even know Yosemite had). It’s a clearly marked side trail right off the main one. It is another incline – so it does add to the difficulty of this hike, but it’s a cool sight and you can see half dome through the arch if you’re willing to add the extra elevation gain.

I’m wearing all sustainable clothing that I can share discount codes for:

Happy Earth Clothes for Conservation, use my code: Kayley15 for 15% off!

prAna Adventure Clothing, use my code: WCKCF18 for 15% off!

Have you done this hike before, what did you think?