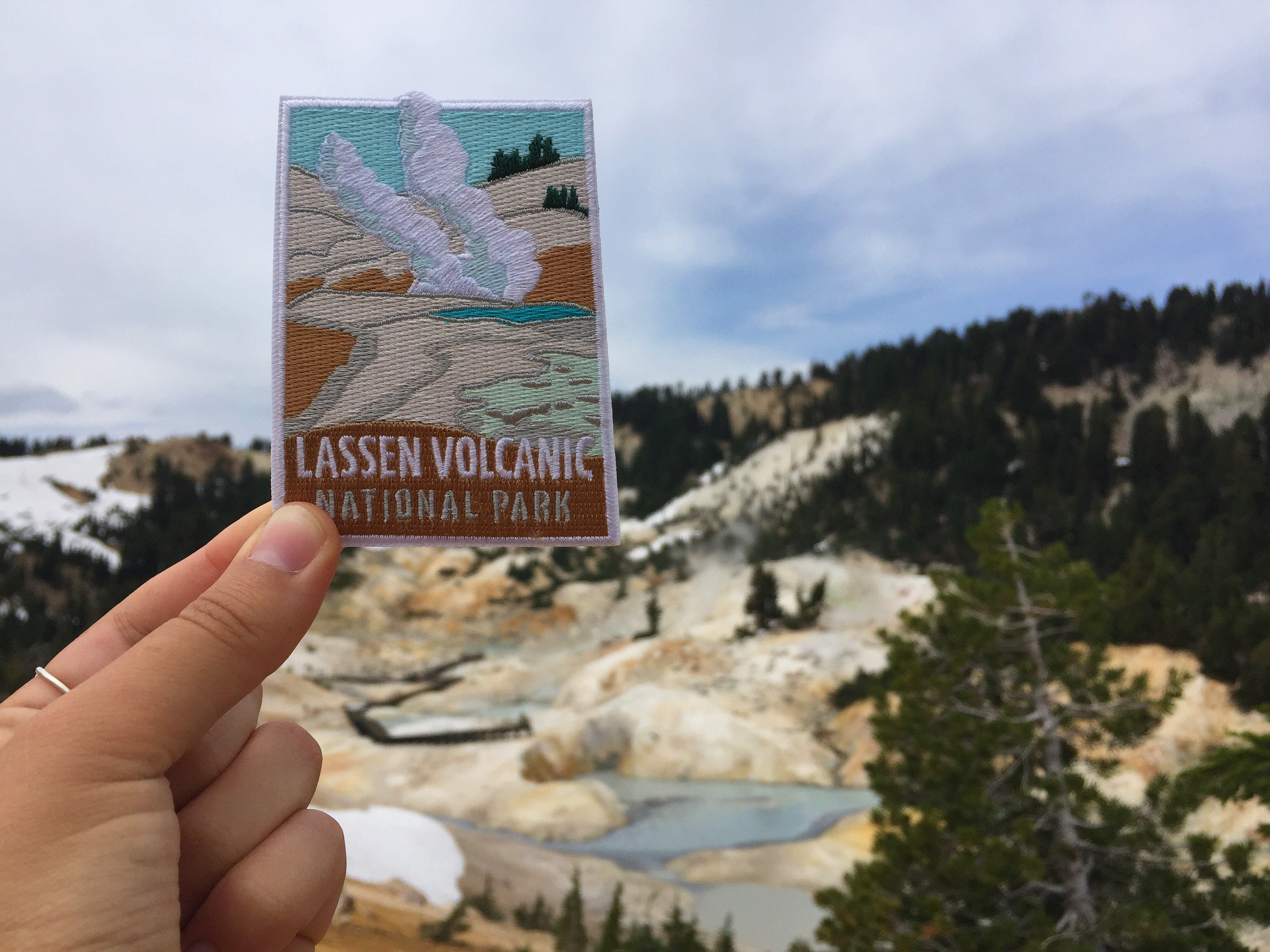 I’m in Lassen Volcanic National Park! This is my first time visiting because it’s super north. This park is supposed to be the National Park’s “best kept secret” and I can definitely feel that in the sense that so few people are here… and it’s a Saturday. Don’t get me wrong, the campsites are full but it doesn’t feel crowded. In fact, I almost turned around on my hike today because I hadn’t seen another human for so long. 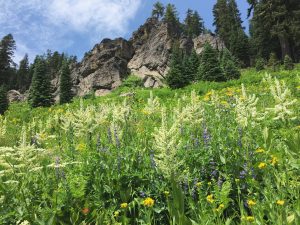 The visitor’s map says that, “at Lassen snow arrives early and stays late. Jagged features are made smooth by deep blankets of snow, yet far below the surface a fire still burns. Eroded volcanic remnants, U-shaped valleys, and roaring steam vents illustrate Earth’s endless cycle of creation and destruction.” So it’s basically a volcanic landscape. 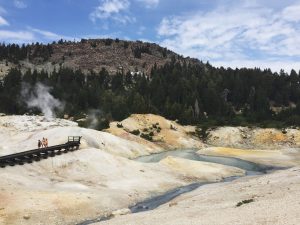 Since I’ve never been here before, I don’t know what the “must-do” hike is. I wanted something unique, so Bumpass Hell with it’s bizarre name and boiling mudpots seemed like it would do. But when I got to the trailhead it was closed! Snow still covered most of the trail, in late August! I was bummed until I checked the map and saw that there’s another way to reach it. 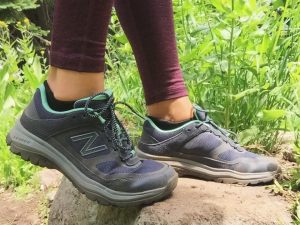 Starting at Kings Creek Picnic Area I took the 0.5 mile trail that leads to Cold Boiling Lake. Once I reached the lake I continued on the trail to the right and started the steady uphill climb to Bumpass Hell. I had no idea what I was getting myself into! The trailhead that was closed is only 1.3 miles away from Bumpass Hell (BH). From the one I took the distance to BH was 2.6 miles. So double! This trail was basically all uphill too; it wasn’t a dramatically steep incline, but it didn’t let up. 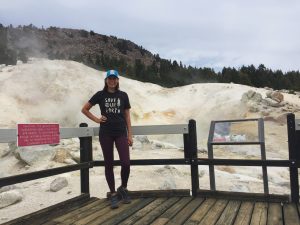 It was a cool trail though; I saw two lakes from above and passed over multiple streams. The wildflowers were ridiculously beautiful; so vivid and at some points on the trail they were up to my waist. Since there were so few people, I had this weird paranoia that I would run into a bear. What the heck am I, a scrawny little girl, supposed to do against a bear? Ugh. Terrible feeling, but I kept praying and kept pushing on. Once I arrived at BH it was a crazy sight for the eyes. Sulfur gas coming out of the ground, boiling mud pots, and acidic streams. It’s tough on the nose though, since the sulfur smells like rotten eggs. 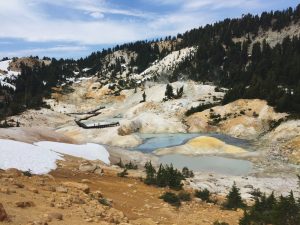 Back at my car I realized that this hike would’ve been so different if my future self could’ve told the past one that I wouldn’t see a bear. It would have been a lot more peaceful and less rushed. Also just more enjoyable, and it got me thinking that I let fear steal some of my joy. How often do we focus on the fear of “what if” rather than the present? I don’t want to hike in fear, nonetheless live in it! My brother is so funny and say’s, “I don’t like fear, I like kicking fear in the ass!” Let’s do that instead.

I’m staying in Summit Lake North campground, which is basically in the middle of the park. From my driveway I can see a tiny bit of the lake. I saw a lot of people swimming in it today.

Have you done this hike before? How long could you stand the sulfur smell? Comment below!